Celebrating the members of the League of Professional Theatre Women

Archive for the category “Composer”

By the time I was five I was already studying ballet and piano, and had seen several children’s musicals, so it wasn’t that big of a leap that when I was five years old, and my sister Judy was three, my mother dressed us alike, and complete with white gloves, toted us off to see the National Company in Chicago of South Pacific. I remember that day as if it were yesterday, from where our seats were, to what the theater looked like…and of course, the piece! This was my first Broadway musical, and I was mesmerized, and I told my mother right then and there that when I grew up, I wanted to ‘do that’—whatever that meant. She assumed it meant that I wanted to be a performer, and for many years, that’s where I thought I was headed too, but I was always consumed with the creative process. How could anyone actually sit down and write South Pacific?? I have been very blessed in that I was able to more or less realize my dream. I was a Broadway performer for many, many years, and then made the segue to full time songwriter as I began a family. I am grateful that I could pursue my career with the help and encouragement of my family, and even as I became a wife and mother, was able to continue a life in the record business, jingle business, and then again the theater. I have been a member of Equity since 1963, and that is a long time. And even before I had my Equity card, I was performing in ballets in Chicago from the time I was about nine. Seeing the recent South Pacific brought back a flooding of those early childhood memories—and I am still asking myself, ‘how does anyone actually sit down and write South Pacific?

Where do you look for inspiration? It comes unannounced!

What play or production changed your life? First time I went to the ballet…The Ballet de Monte Carlo in Paris, with my mother when I was 8 years old!!

What is your best escape? Sci-Fi …right now having Gabriel Nussbaum & Elizabeth Wood’s Bank Street Films make a TV opera of my chamber opera Villa Diodati – about Mary Shelley who wrote the great Sci Fi “Frankenstein”…Villa Diodati had 6 well reviewed productions including in the NYMTF 2008, but am looking forward to this live TV filming on May 6, 2012, 7:30 pm at the York Theater in St Peters Church!!!

What’s the one thing few people know about you? That the award-winning Bank Street Films company’s producers are my grandson & his wife!! 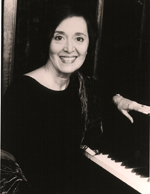 I get my inspiration from words, feelings, other music.

My favorite movie is The Young Philadelphians.

The production that changed my life happened when as a high school student I attended a Methodist Youth Conference at Purdue University and saw students from Lon Morris College perform excerpts from ten great plays.

I still dream of getting my unproduced shows on. Dream on.

I feel most like myself when a show of mine is in rehearsal.

If I tell you the one thing nobody knows about me, it won’t be any more, but I do like to dance in the aisles at Gristedes.

Nancy Ford has done thirteen shows with Gretchen Cryer (including The Last Sweet Days of Isaac, I’m Getting My Act Together and Taking it On the Road, American Girls Revue, Anne of Green Gables), one with Mimi Turque (Blue Roses); one with Tom Jones (arrangements and additional music for The Game of Love).

I dreamed of being a concert pianist. So I could stay at home and practice, I started a mail order business selling celebrity photos. I made enough to pay for the ad in the Voice but not the gas, electric, or the bill from the movers who had hoisted my piano up to our 5th floor walkup. So I got a “real” job and practicing after work, when all our neighbors were home, was out. There was only so much they could take of the 3rd measure in Bach’s Italian Concerto.

Then one weekend we went to the North Fork. “What a great place for a theater!” I said to my husband. (He claims he said it.) Neither of us had any training, but if we had a summer theater, we thought, we’d have our own business, we’d only have to work for a few months, and in the winter we’d pursue our dreams.

So we mimeographed (!) a brochure, sold shares for $25.00 each and when we raised $2500.00, rented land in Greenport (next to Mr. Kramer’s drugstore because he agreed to let us use his bathroom), put up a tent and voila! – The Greenport Summer Playhouse. “What time is the show,” our first caller asked? “What time can you get here?” My husband answered.

Although the locals – mostly farmers and fishermen — were not too excited about our choice of plays, we decided to only do plays that we wanted to see. This gave us the opportunity to produce A View From the Bridge with Jason Miller; an African-American cast in A Taste of Honey featuring Hazel Scott; and one summer, The Fantasticks in which David Mamet played the Indian, a non-speaking role! And as I watched every rehearsal of every show, saw Jason Miller become Eddie Carbone one night and the next, Murray Burns in A Thousand Clowns, I thought: I want to do that; I can, I will. And that’s what inspired me to give up my dream of being a concert pianist (my teacher was very relieved!) and begin a career in theater.

Gail Kriegel is developing her musical Sweetie which began life when she was Artist-in-Residence at the Tribeca Performing Arts Center. Her play On the Home Front will be produced in LA next fall and she is one of the seven playwrights who wrote Seven which has been produced all over the world and translated into 10 languages.