Celebrating the members of the League of Professional Theatre Women 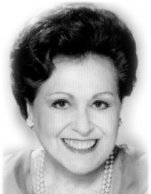 My inspiration came from my beloved mother who loved all the arts, played Galli-Curci and Caruso records on the old Victrola, read Pushkin to me in Russian when I was little, and got me a piano scholarship when I was eight years old. Now I gather inspiration from all the arts, theatre, music, painting, et al.

I read all the time and have many favorite books. One that touched me was Mitch Albom’s “Tuesdays with Morrie.”

I love Shakespeare and the quote “How much better it is to weep at joy than to joy at weeping” from Much Ado about Nothing. I also like my heroine Eleanor Roosevelt’s motto: “It is better to light a candle than to curse at the darkness.”

I was greatly affected by Lillian Hellman’s The Little Foxes, and I’d love to perform in other of her plays.

I feel most like myself when I am with people who I respect and admire, that is my best escape. There really isn’t anything about me that friends don’t know, I think I’m an open book.

Sondra Gorney performed in Chicago’s Federal Theatre, then in NY summer stock. She reviewed film and theatre for PIC Magazine, was an associate producer for West Coast musicals, wrote reviews for a newspaper, and helped found a musical play department at the Dramatic Workshop and the American Theatre Wing. She is an actress and writer.